Earlier this month we were delighted to host an open conversation  ‘Little Stones, Large Cairns’ sharing the story of the United Nations International day for the Eradication of Poverty - hearing from folk across the UK and around the world about what the day means to them.

Patrick in New York shared his experience of speaking at the United Nations and we are delighted he has given permission for us to share his words with you here. 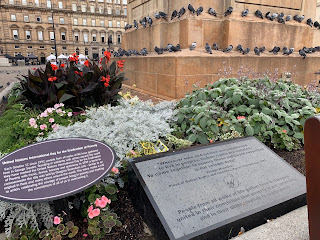 Good afternoon everybody. Thank you for the invitation to celebrate with you today, for me it is a great honor.

The International Day for the Eradication of Poverty is important for me because it is a commemorative day to honor all the victims of poverty and to celebrate all the people fighting to eradicate poverty in the world. It is a gathering all around the world, all of us who have suffered of poverty together with all that are fighting to end poverty. It is a moment of meditation to make silence to honor all the victims of poverty. For me it is as well a day to remember Joseph Wresinski, the founder of ATD Fourth World.

I remember very vividly the first time I went to the United Nations. Christelle, a friend, invited me to the commemoration on October 16, 2015.

For me, who has defended people all my live before living in the street,  when I spoke at the UN on October 17 2016, it was to represent all the people that, like myself have suffered in the street. It was an opportunity to honor the fight of these people.  I have witnessed all this and I have to be there, I have to participate.

I got into this fight because we are representing ourselves, our families, our communities and ATD Fourth World. We represent people around us, even if we don’t know them. We are engaged in the same fight to stop poverty, to bring awareness to churches, mosques and temples, to reduce inequalities, to stop human rights violations,  to change the laws.

To stop poverty in the world we have to get involved, I feel if I am not there I am missing something crucial. I have to be here and fight because we need to defend the right to be respected, to housing, to food and we need to end humiliation.

Being present and feeling welcomed at the United Nations is a huge honor for me, especially to have the right to speak. It is a powerful privilege to address my speech to the world, to explain what I went through while living in extreme poverty and what a challenge is to survive.

October 17 is a day to celebrate, at the UN we are present with our power to make people understand and become aware that there is another world where people suffer and are traumatized because of poverty. Society mainly doesn’t care, we are mistreated and humiliated. So we are there to stop humiliation and represent our people.

When Kim spoke at the UN for the first time, for her, for us, it is a lot of pain but it give us the chance to change what people think about poverty, what we can do better to stop poverty so that people understand and have knowledge of what poverty is, what kind of traumas we go through. Thanks Fighting poverty is a kind of war for us.

At the UN we want to send a message and there we feel we are not alone because people are there with their heart and intelligence to support us to eradicate poverty.

We are there to advocate for people who don’t have the possibility to speak, to be heard, so that we are not forgotten. If you speak at the UN you speak to the world.

Having the commemorative stone at the UN for me means to remember for ever October 17, 1987 when father Joseph Wresinski inaugurated the stone in Paris and when later the day was recognized the day to honor the victims of poverty.

I remember when I used to go with my father to the memorial to honor the victims of war, the stone is the same, it is a monument to honor people in poverty. Poverty is a war because it is killing people.

The stone is a place to be all together to respect and take a moment of silence for the victims of poverty.