Over the last few weeks a number of our commissioners have been involved in responding to the Scottish Government’s consultation on its proposed Community Empowerment & Renewal Bill.


·         On the 12th September Martin Johnstone attended the first meeting of the Bill’s Reference Group (which the Poverty Truth Commission has been invited to be a member of) along with 40 plus other folks. It was an interesting couple of hours with a lot of enthusiasm expressed for some of the aspirations expressed in the consultation. Martin sought to highlight the Commission’s enthusiasm for Participatory Budgeting and to emphasise that whilst talk about who owns buildings is interesting we all need to remember that it is people, not buildings, which are our greatest asset.


·         On the 15th September, Martin & Donna Barrowcliffe attended a meeting hosted by Glasgow City Council to help local groups to respond to the consultation. Another interesting event with strong support for more effective community empowerment and a deep sense that it was time for governments to move beyond good words into genuine actions which show that they believe that local people have the wisdom that pass others by. 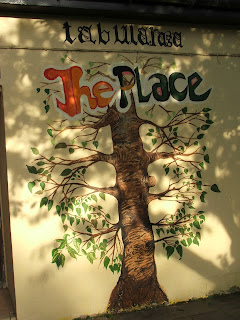 Last week in Glasgow it was GRAND (Getting Real about Alcohol 'N' Drugs) Week, which is a city-wide initiative that enables communities to develop local responses to alcohol and drug issues.  A number of groups with links to the Poverty Truth Commission were involved.
Faith in Community Scotland's Faith in Throughcare project launched, as part of the week, their book 'In My Place' which contains a collection of stories and poems written by those involve in the project at their drop in centre, The Place in Possilpark. The project works through faith communities in Scotland’s poorest neighbourhood’s to support people who are being released from prison to settle into more fulfilling lives in their families and communities. Copies of the book are available from the Faith in Community Scotland office by calling 0141 221 4576.
One poem included in the book is called Doors of Hope.
The door opened and there I was
Back in the world of confusion
And fear not knowing what lies
Ahead but to be honest if I knew
What I was facing I would try
Not to open the door of despair
And stay in my own world of what I thought was Safety.
The punishment never ends.
Anon
Another book of creative work launched as part of GRAND Week was written by Kinship Carers from Glasgow with the help of the Village Storytelling Centre in Glasgow. The book includes stories of how drug and alcohol misuse can affect families written by some amazingly strong and resourceful people who have some extremely moving stories to tell. One poem from the book is a haiku.
five kids in my care
world of trouble, full of love
hop, skip and a jump
Copies of the book are available at the Village Storytelling Centre.﻿

Posted by Poverty Truth Commission at 11:42 No comments: Links to this post

Job Opportunity for a Researcher with The Poverty Truth Commission

The Poverty Truth Commission are looking for a part time Researcher to join our small staff team.

The role is an exciting opportunity to pro-actively assist the Poverty Truth Commission directly involve people in poverty in decision-making to develop effective working partnerships with the Scottish Government, local authorities, third sector organisation and other agencies. The part time role is for 14 hours a week and will be paid at £24,058 p.a (pro-rata).

As a Development Worker (Researcher), the successful candidate will work with people experiencing poverty to ensure that their wisdom informs policy and practice in the struggle to overcome poverty.

For more information about the role and to download a copy of the job description and application form visit the Faith in Community Scotland Website.

“Nothing About Us Without Us Is For Us”
Posted by Poverty Truth Commission at 15:03 No comments: Links to this post

THIS year's STV Appeal has raised just under £2,000,000 for children living in poverty in Scotland, half of which was raised through donations with the remainder being match funded by the Scottish Government.

The Appeal hopes to expose Scotland’s secret shame, raise awareness, challenge stereotypes and draw attention to the real extent of child poverty in Scotland. They hope to give Scotland's vulnerable children a voice. You can find out more about the appeal at their website.

The Poverty Truth Commission believes that poverty will never be truly addressed until those who experience it first-hand are at the heart of the process and that includes children. We have worked with a number of children about their experiences of poverty. The video below called 'My name is Isha' gives an insight into one girl's thoughts about poverty.

Posted by Poverty Truth Commission at 11:48 No comments: Links to this post

Hopes and Dreams and Girlie Schemes


IN the past the Poverty Truth Commission have used video as a way of helping people to share their stories. One example of this is 'Hopes and Dreams and Girlie Schemes' in which Gemma, Jennifer, Josie and Nicola from Ruchazie, Glasgow, share their hopes and dreams for the future.