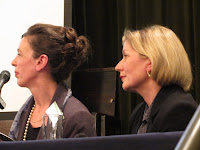 Last month the Church of Scotland's Commission on the Purposes of Economic Activity met with Alex Neil, the Cabinet Minister for Capitol Investment. In a similar way to The Poverty Truth Commission they challenged the Government's anti poverty policies.

On 28th October the Poverty Truth Commission's Kinship Care working group met with Duncan McNeil MSP and Drew Smith MSP, with last minute apologies from Johann Lamont MSP, Jackie Baillie MSP and Dr Richard Simpson MSP.
This group of Labour MSPs are keen to support the campaigns of Kinship Carers for the vulnerable children in their care to receive adequate allowances and services to enable their survival and give them an equal chance to children in foster and accomodated care.
Actions from the meeting included looking into setting up a cross party group on Kinship Care in recognition of that fact that Kinship Care is not currently addressed as part of Carers or Addiction strategies and need special attention.
Posted by Poverty Truth Commission at 12:46 No comments: Links to this post 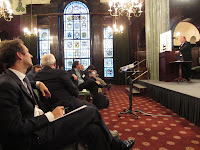 On 21st and 22nd October Commissioners Blair Green, Carol Turner and Anne Marie Peffer presented testimonies of poverty and promoted the collaborative working model of the Poverty Truth Commission at the Law Society's Human Right symposium on Realising Economic, Social and Cultural Rights in the UK in Chancery Lane, London.
150 delegates including lawyers, politicians and third sector groups saw animations on the degrading experience of going to the job centre, and on domestic violence. They also heard a story of in work poverty and debt due to the 'poverty premium' where life can actually be more expensive for those living in poverty. Most importantly they were challenged to include those in poverty whenever they make policies and projects about poverty.
The Commissioners were overwhelmingly well received and also gave a workshop on the method behind the process. As a result of the conference a number of delegates will look at introducing more participation in their organisations. These include Kate Green, MP for Stretford and Urmston, Manchester, who will be holding a series of poverty hearings in collaboration with colleagues, borrowing extensively from the PTC's model.
Posted by Poverty Truth Commission at 13:54 No comments: Links to this post